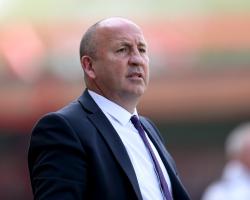 The Clarets have exited this competition to lower-league opposition at the first-round stage in each of the previous two campaigns and Coleman is eyeing a hat-trick of upsets.

"We have got to realise the importance of each game and we have got to seize each and every opportunity," Coleman said on Accrington's official website.

"I believe, if we play to our best, we can beat Burnley and we will be giving it our best shot."

While Coleman is entertaining the idea of a victory, good friend Jim Bentley has taken the pressure off fellow League Two side Morecambe ahead of their home clash with Bournemouth.

The Shrimps, who travel to Accrington at the weekend, are in fine fettle having won four games on the spin since an opening-day loss to Grimsby, yet Bentley is aware that onlookers will expect their run to end against the Cherries.

"It is a massive game for us and we have nothing to lose and everything to gain," Bentley said on www.morecambefc.com.

At the same time there is nearly always a shock in these rounds and we are hoping that we can be the side that creates that shock.

We know we will have to be at our best and Bournemouth to have a poor night to get a result but we do have the belief and we will be giving our all I can assure you."

David Moyes is sure to be reminded of Shrewsbury's 2003 FA Cup win over Everton when Sunderland host the Shrews in their first cup game under his watch.

A Toffees side managed by Moyes and featuring Wayne Rooney was defeated 13 years ago by Shrewsbury, who have welcomed Chelsea and Manchester United in back-to-back seasons in the FA Cup.

Speaking of the Everton win, current boss Micky Mellon told Shrewsbury's official website: "It was a fantastic day in the club's history and I am sure everyone enjoyed it.

All these games mean a lot to the club.

He will be wanting a win but we will go up there and try and spoil that for him."