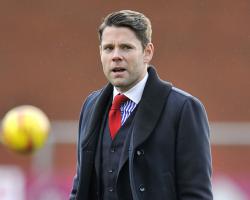 The former England striker has been in charge of Stanley since May last year but Beattie has still yet to acquire a UEFA B licence, which is a requirement for any bosses in Leagues One and Two.

A Football League-appointed commission has therefore levied the fine on Accrington, ?15,000 of which will be suspended provided Beattie achieves a UEFA B licence by May.

The Football Disciplinary Commission claims it notified Stanley in April and again in May of their need to hire a manager possessing a B licence, and one who was also working towards acquiring an A licence within three years of their appointment.

A statement from the Football League added that Beattie, in his first managerial post, had also not enrolled on a course or been able to confirm his place on a future course for a B licence.

Previous managers including Glenn Roeder, Gareth Southgate and Paul Ince have all held Barclays Premier League positions despite not obtaining the necessary coaching badges, in their case a UEFA Pro Licence.

Roeder was appointed Newcastle's permanent manager in 2006 after then-chairman Freddie Shepherd successfully appealed on the basis he would get the qualifications while in the job.

Later that year Southgate profited from a similar ruling at Middlesbrough while in 2008 Accrington's neighbours Blackburn were given special dispensation to appoint Ince, who was then allowed two years to earn his licence.

Only last month Tim Sherwood was handed the reins at Tottenham, without holding a Pro Licence, but he must enrol on a course within 12 weeks of his appointment.