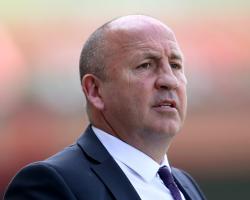 The Premier League Clarets were eliminated at the first hurdle by a League Two club from nine miles away in their first ever competitive meeting since Stanley's reforming in 1968.

Matty Pearson's winner in the final stages of extra time was not even greatly received by the majority, though, with 1824 Burnley fans making up the bulk of the 3,170 who had come to watch a fixture that was televised.

It dismayed Coleman on a night when the manager, who has spent the majority of the 21st century with the club during two stints, saw his team land a trip to West Ham in the third round.

"I've been critical of the numbers and I think rightly so," Coleman said.

"This is a once-in-a-lifetime opportunity, it's never happened in anyone's lifetime

You're wondering what everyone wants.

"The chance to cash in a little bit, get a little bit of that back and generate more money towards the playing side, it's been snubbed by the people of Accrington

We can build something special here

"I'm flabbergasted with the gate tonight

If you're complaining that you're not coming because of ÃÂ£20...I think it's a once-in-a-lifetime opportunity to support your club

We've got to ask ourselves does the town want a Football League club?"

We're not in a position to cherry-pick

"We have to work in the market the best we can, find players where we can and if that means shifting our pack then we'll have to do that."