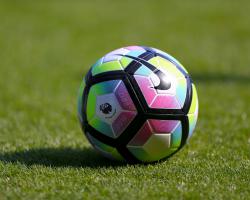 The League Two club's chairman on Tuesday hit out at the Premier League on Twitter following a report in the Daily Mail that agent Mino Raiola pocketed ÃÂ£41million from the deal that saw Manchester United sign Paul Pogba.

Holt accused the Premier League of "destroying the game" and branded it a "disgrace" on his social media account.

The Premier League responded with a statement saying it would write to Holt to ask if he wanted the organisation "to continue the support" it provides to his and other English Football League clubs.

But Holt continued his criticism on Wednesday, explaining how much some EFL clubs were struggling financially.

We're desperate for it and they know we are.

"That's why they put out letters like they did last night that are very threatening, dark, and speak volumes for their attitude to everyone that's not Premier League to me.

" Football is in crisis

The lower league is really struggling, and I'm not the only chairman who feels like this.

"What they're saying is not only are they not bothered about it, anybody who complains about it, 'we'll take your money away and shut you down'.

"Other EFL clubs share my views, not all of them

I'm not trying to lead a rabble, I'm expressing an opinion - but I'm not alone.

"I can't do anything about it

My opinion's the same, whatever they do."