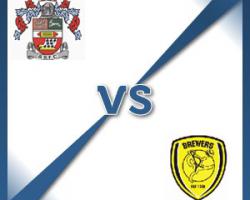 Accrington Stanley V Burton Albion - view commentary, squad, and statistics of the game live.Coleman to shuffle Stanley packJohn Coleman is likely to shuffle his Accrington pack again for Burton's visit to east Lancashire.Coleman made three changes against York on Boxing Day, with loanee John O'Sullivan's return to Blackburn resulting in the only enforced change, as Stanley fell to a 1-0 loss.Kal Naismith, James Gray and Shay McCartan are all options if Coleman opts to shake things up once again.Luke Simpson will continue in goal after West Brom loanee Jack Rose (hip) was ruled out for a couple of weeks.Alex MacDonald is a major doubt for Burton after suffering a badly-gashed knee against Tranmere.MacDonald was hurt colliding with an advertising board by the side of the pitch and he is likely to miss Sunday's match.Fellow winger Lucas Akins has been absent for the past month with a niggling ankle problem but he could return

However, goalkeeper Dean Lyness (broken leg) will definitely remain on the sidelines.Jimmy Phillips returned to the bench against Tranmere, making his first appearance in a Burton squad since he suffered a torn cruciate ligament at Newport in April