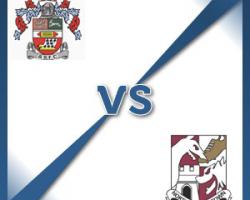 Accrington Stanley V Northampton - view commentary, squad, and statistics of the game live.Same again for StanleyAccrington are expected to keep an unchanged squad against Northampton despite losing their third match in a row last week.Tom Aldred is likely to miss his second game in a row amid talk of a move to Oldham.Adam Buxton played 75 minutes in the loss to Bury in his first start after four months out injured and is expected to keep his place.Jack Rose could be set for a return having started training again following a hip problem.Northampton have Ricky Holmes and Tom Newey available after they both signed permanent deals this week

Midfielder Holmes, who was on loan, joined from Portsmouth and left-back Newey, who had a four-game spell at Sixfields earlier in the season, signs after being released by Oxford

Boss Chris Wilder told Cobblers Player: "We are going to have to do all the good things we've done in the last month if we're going to get a result."