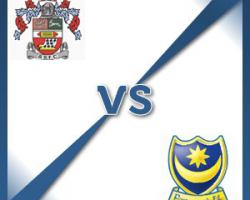 Accrington Stanley V Portsmouth - view commentary, squad, and statistics of the game live.Accrington v Portsmouth TNAccrington are expected to select from a similar pool of players when Portsmouth visit east Lancashire in Sky Bet League Two.Stanley did have full-back duo Nicky Hunt (groin) and Adam Buxton (hamstring and illness) back in full training this week but this fixture may come too early for the pair.Hunt has been out of action for the past three fixtures while Buxton, whose comeback was hampered by a bout of flu, has not played since February 10.John Coleman's men have lost back-to-back fixtures and he could consider changes as a result, with Kal Naismith, Seamus Conneely and Shay McCartan all vying for inclusion in the starting line up.Portsmouth are short in defence with Ben Chorley suspended and Jack Whatmough doubtful.Chorley serves a one-game ban after he was sent off during Tuesday night's 1-0 defeat at Northampton, a match fellow centre-half Whatmough missed due to a shin injury.Boss Andy Awford can welcome back midfielder James Dunne, who has completed a two-match suspension for collecting 10 yellow cards this season.On-loan striker Paul McCallum could also be back in the squad