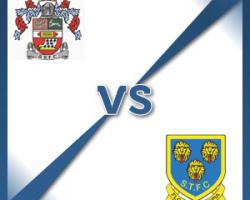 Accrington Stanley V Shrewsbury - view commentary, squad, and statistics of the game live.Winnard set to return for StanleyDean Winnard is set to overcome an injury scare to make Accrington's Sky Bet League Two fixture with Shrewsbury.The centre-back, who boss John Coleman dubbed "the best defender in the league" at the weekend, came off in the second half with a knock but is expected to pass a fitness test.That would be a boost for Coleman given full-backs Nicky Hunt (groin )and Adam Buxton (illness) have been out of action, although Matt Crooks did sign a permanent deal at the Store First Stadium last week.Stanley were beaten by Luton at the weekend and that may force Coleman to rethink his formation, with winger Gerardo Bruna hoping to profit if he rejigs things.Shrewsbury are without Liam Lawrence again after the skipper missed Saturday's 2-1 defeat to Northampton with a dead leg

The ex-Sunderland ace limped out of the loss at Tranmere and has not trained since as Shrewsbury look to avoid a third straight defeat.Boss Micky Mellon is without James Wesolowski and Nat Knight-Percival who are out for the season with knee injuriesAndy Mangan is still a couple of weeks away from full fitness after a knee operation