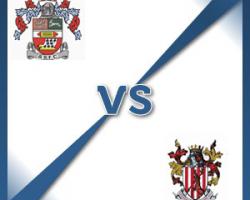 Accrington Stanley V Stevenage - view commentary, squad, and statistics of the game live.Gornell serves banTerry Gornell is back from suspension for Accrington's home clash with play-off chasing Stevenage.Stanley, who picked up a point against Hartlepool in midweek to secure a 10th straight season in the Football League, have been without striker Gornell for the past three games following his dismissal in the derby against Morecambe.However, there is no guarantee he will walk straight back into a team which has picked up five points in his absence, with Josh Windass thriving in a more advanced role and scoring against Pools.Lloyd Jones is free to play again after extending his loan earlier this week and fellow defender Dean Winnard was back on the bench in the north east following injury, but Andy Procter (ankle) will not play again this term

Harry Worley could make his first appearance since August for Stevenage.The former Chelsea trainee is fit after seven months out with a knee injury and was named on the bench against Portsmouth in midweek.Fellow defender Ronnie Henry was also among the subs after three weeks on the sidelines with a hip problem.But Roarie Deacon, Ben Kennedy, Dave Martin and Jon Ashton are still doubts while Calvin Zola and Adam Marriott will miss out again