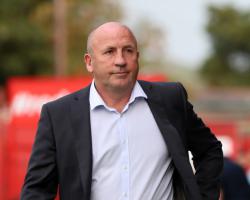 Matty Pearson's winner in the final minute of extra-time saw Stanley eliminate their Premier League neighbours in the first ever competitive meeting between the two since they were reformed in their current guise in 1968.

Accrington's reward for their 1-0 victory was a clash with another top-flight club, at Slaven Bilic's West Ham, a team who list members of Coleman's family among their supporters.

Coleman is determined to ensure his grandchildren do not belong to that band, though, and sees it as an ideal opportunity to win them over, even if a lower-key tie would have been to his liking.

"It will be nice to go there, it will be difficult," he stated

"I'd have preferred Northampton at home

There will be divided loyalties in our house

The acid test will be what top the two grandsons are having."

The cash windfall will also be greatly received by Stanley, who have struggled to balance the books in the recent past despite establishing themselves as a Football League club over the past decade

"It will generate some finance and it will help towards the playing side of it," Coleman added

This will be a massive boost for us."

Their victory came over a much-changed Burnley side, with only Sam Vokes retained from the XI that defeated Liverpool in the league at the weekend, and Sean Dyche's fringe players offered no evidence they are worth breaking into his usual line-up

However, the Clarets boss refrained from slating his team and focused on two tackles he took umbrage with, one from Sean McConville on teenager Aiden O'Neill and another on full-back Tendayi Darikwa from Paddy Lacey

"I was really pleased with the performance in general," Dyche claimed

I've seen a ridiculous challenge which is a red card immediately

There's a two-footed tackle in the second half let go

I'm amazed by the referee but that's part and parcel of the game."

"If the referee had done his job and given the foul on Shay McCartan in the first place, we wouldn't be talking about that," Coleman argued

Anyone who knows Shay McCartan knows he would never top anybody

"The referee let too many things go tonight

There were a couple of really nasty challenges

If we're talking about reds, there could easily be reds for them as well."