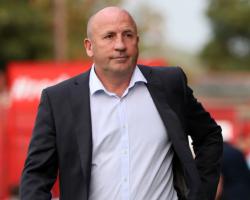 Sky Bet League Two Stanley, who are coming up against a club who have conceded 11 goals in three straight Premier League defeats, make the trip to the London Stadium having beaten higher-division opposition in both of the previous rounds.

They saw off League One Bradford on penalties after a 0-0 draw in round one and then top-flight Burnley in round two, with Matty Pearson sealing a 1-0 win in the final minute of extra time.

Coleman, quoted on Accrington's official website on Tuesday, said: "The players have earned the right to play there with their wins over Bradford and Burnley which were two tough games.

"They have earned the right to enjoy this and the best way to properly enjoy it is to win.

"We will be going out there to win

It is hard to prepare for this one as we don't know what team they will put out but we do know their style of play.

"We believe in our own ability and it's a chance for the players to play in a big stadium in front of a big crowd."

Around 600 Accrington fans are expected to be at the match and Coleman added: "We have had away trips where we have taken 500 or 600 fans and they have drowned out the 10-20,000 fans of the opposing team.

"Let's hope we can serve up a treat and a performance they can be proud of."