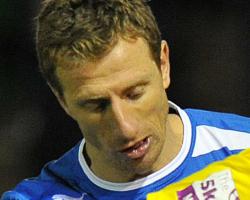 Accrington immediately suspended Lacey pending the outcome of disciplinary action and after the FA announced his suspension on Friday, the Sky Bet League Two club have terminated his contract.

"The 24-year-old tested positive for a prohibited substance after the game at Hartlepool United in November 2016," the club said in a statement

"He was immediately suspended by the club pending the outcome of the disciplinary action taken by the FA.

"Upon the completion of those proceedings this week, the club took immediate action and terminated the contract of the player.

"Accrington Stanley has strong values on anyone taking any prohibited substances and will always act in the strongest possible way to protect the integrity of the football club.

Lacey joined Accrington on a free transfer from Barrow in July last year and made 17 appearances this season, but has not played since December 10

An FA statement read: "Patrick Lacey has been ordered to serve a 14-month suspension from all football and football activity after admitting a breach of The FA's Anti-Doping Regulations

"The Accrington Stanley player provided an in-competition urine sample which contained the presence of Benzoylecgonine, a metabolite of cocaine.

"The test was carried out after the Hartlepool United versus Accrington Stanley game on November 22, 2016.

"The suspension, which followed an Independent Regulatory Commission Hearing, is effective from December 15, 2016, up to and including February 14, 2018."